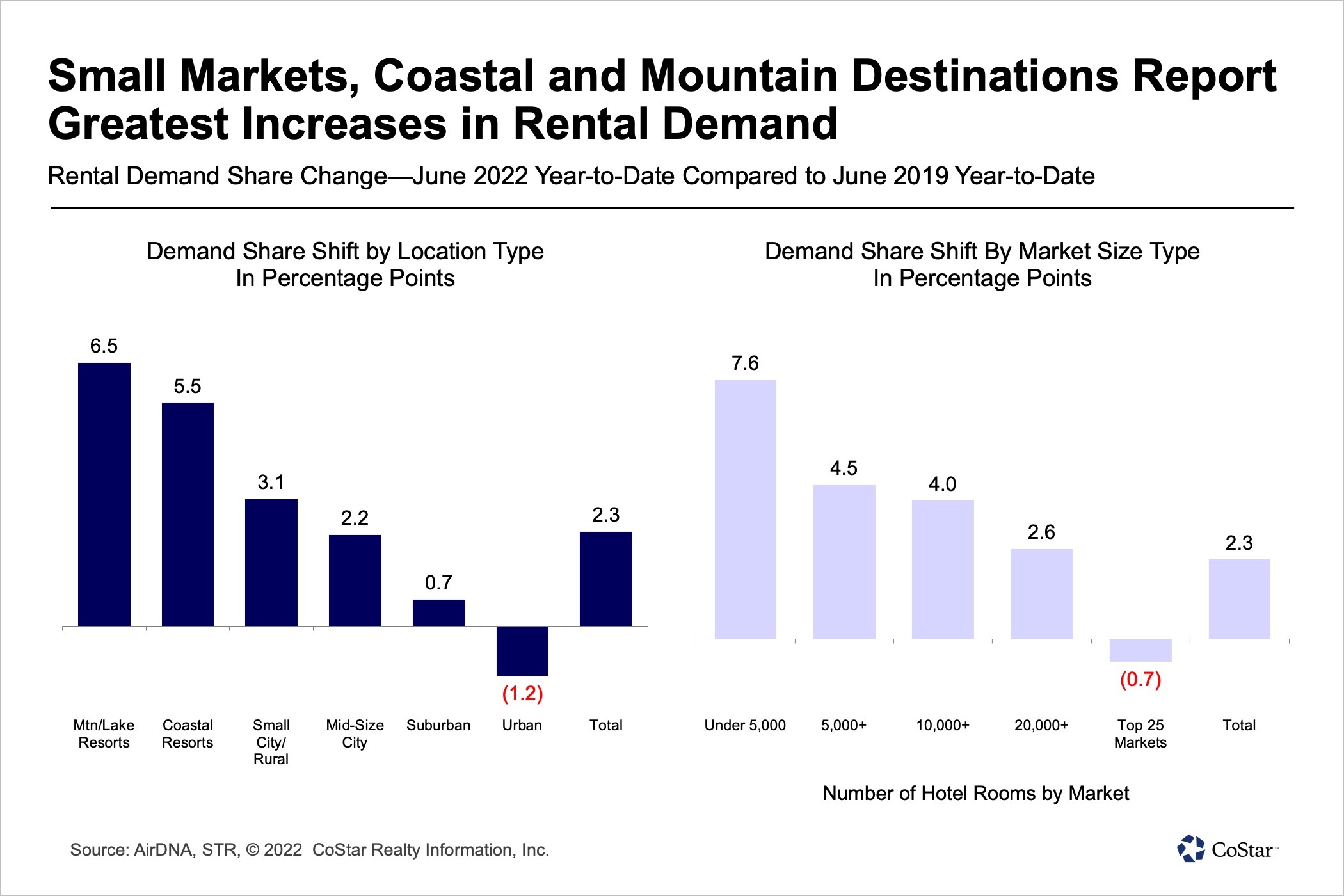 NASHVILLE, Tenn. — The recovery in demand in the hospitality and short-term home rental sectors appears to be happening quickly, but there are clear differences between the two.

Speaking during a session at Hotel Data Conference titled “Hotels, Home Rentals and How Performance Trends Continue to Evolve,” AirDNA Chief Product Officer Max Bernstein said in June 2022, demand for short-term rentals is up 21% indexed over 2019, while hotel demand is down 3.4%.

“What’s really interesting is to see a persistent contraction in the amount of demand in urban markets,” he added.

STR Vice President, Analytics, Isaac Collazo, said that in smaller markets, the biggest increase in rental demand share has occurred in coastal and mountain/lake destinations, in particular. In addition, rental demand increased the most in markets with fewer than 5,000 hotel rooms.

These core markets have always performed very well before COVID-19, Bernstein said, but the pandemic has made it even stronger.

Collazo noted that while it’s true that rental demand is growing, much of the growth “is in areas where hotels aren’t.”

“I think that’s the first clue, when we were working with this data; there are less than 5,000 rooms in this set of markets, but that’s where the biggest growth is. [for rentals]“, he said. “Essentially … rentals go to market and capture demand.”

In the top 25 markets, however, the share of rentals has fallen, he said.

When charting the rental market’s growth trajectory, Bernstein said the increase in demand share has not kept pace.

“Things have kind of balanced out where they were before,” he said.

Collazo said a big gain for rentals at the start of the pandemic made sense because it was a time when groups and families wanted to travel in “social bubbles”.

June 2022 year-to-date data indexed to 2019 shows that for every home rental sold across all types of locations and markets in 2019, nine hotel rooms were sold, while in 2022 the ratio fell to seven rooms, Collazo said.

“When you look at the difference in distribution between markets based on their ADR movement, you see markets that are up 20%, 30%, 40%, 50% year over year,” said he declared.

Collazo said the main difference is that hotels saw a decline in ADR, but then rebounded. Short-term rentals have yet to experience a decline in ADR as part of the recovery.

In terms of location type and market size, the short-term rental market achieved higher ADRs than hotels, with the exception of the suburban market.

“This could be good news for [hotels] for competing purposes. [Short-term rentals] grows faster [but] we also have a good product on the hotel side, maybe we can raise the rates – but that doesn’t suggest anything, I should say,” Collazo said.

“But again, the numbers are very different. Pigeon Forge rentals were up 42% ADR, while hotels in this market were up 19%,” he added.

Back to Hotel News Now homepage.