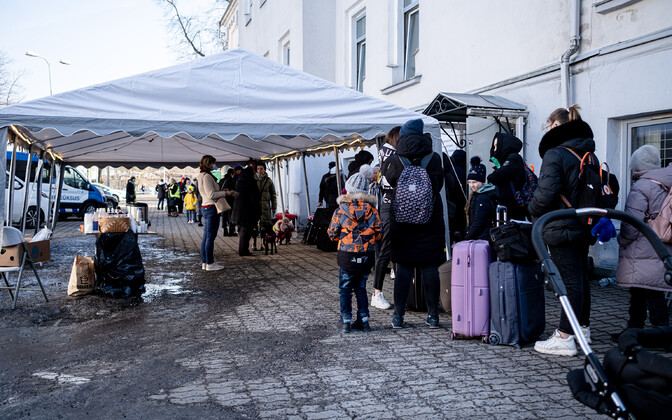 The majority were taken to Pärnu, Tartu, Rakvere and Tallinn after entering the country via the Ikla border crossing in southern Estonia. They will be physically accompanied, tested for the coronavirus and then registered.

Questions are also asked about the children and whether they should go to kindergarten or school.

The majority of refugees are women and children. Indeed, Ukraine has banned men between the ages of 18 and 60 from leaving the country.

On Tuesday, AK spoke to people outside the reception center in Tallinn’s Kalamaja district.

A new arrival, Aljona, said she does not plan to put her child in kindergarten as her plan is to return to Ukraine as soon as possible.

Another woman told the show why she chose to come to Estonia: “I was born in Tallinn, but lived in Kharkiv, Ukraine, for 25 years. I brought my children here from Tallinn on March 9.”

But some people arrived in Tallinn without any family ties. Valentina told AK that she now needs to find long-term accommodation to live and work.

Tatiana told AK: “We want the war to end tomorrow and we can go home. We are here because there is a war and our children need security and education.”

So far, less than 5,000 refugees have needed state assistance to find accommodation, but that number is growing. There are 4,200 places and accommodation can be offered for a month.

The Estonian Refugee Council’s communications officer, Madle Timm, said during the month that the organization would try to find them longer-term rental accommodation.

The Police and Border Guard Board (PPA), which manages the arrival process, said it is likely European Union support will come into effect soon.

“At some point, it is very likely that EU-wide relocation mechanisms will also come into play,” said PPA crisis manager Egert Belitšiv.

Funding to the Estonian Refugee Council covers the cost of evacuations from the Polish border. It is believed that they will continue to organize departures for another three weeks.

Since February 27, approximately 22,000 refugees have arrived in Estonia from Ukraine, of whom approximately 40% are children. Of the total, 6,000 said they did not plan to stay in Estonia and were transiting through the country.

Estonia has 1.3 million inhabitants, so newcomers already represent 1% of the population.

Column: The end of San Diego’s tortured path to limit vacation rentals is near